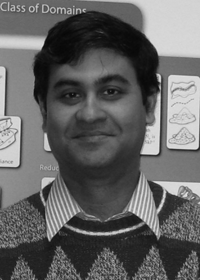 Title: Computational Topology and Data Analysis: A New Way of Looking at Data

Abstract: Many applications involving shapes and data not only require analyzing and processing their geometries, but also associated topologies.  In the past two decades, computational topology, an area rekindled by computational geometry has emphasized processing and exploiting topological structures of shapes and data. The understanding of topological structures in the context of computations has resulted into sound algorithms and has also put a thrust in developing further synergy between mathematics  and computations in general. This talk aims to delineate this perspective by considering some applications shape and data analysis for which computational topology has played a crucial role. For these applications, we will emphasize the role of topology, state some of the key results, and indicate open questions/problems. The hope is that the talk will further stimulate the interest in tying topology and computation together in the larger context of data science.

Bio: Tamal K. Dey is a professor of computer science at Purdue University where he joined from Fall, 2020. Before joining Purdue, he was at The Ohio State University where he served as the Interim Chair of the CSE department. His research interest includes computational geometry, computational topology and their applications to geometric modeling and data analysis. He finished his PhD from Purdue University in 1991. He has held academic positions at University of Illinois at Urbana Champaign, Indiana University-Purdue University at Indianapolis, Indian Institute of Technology, Kharagpur, India, and Max-Planck Institute, Germany.  He has (co)authored two books``Curve and surface reconstruction: Algorithms with Mathematical Analysis" published by Cambridge University Press and "Delaunay Mesh Generation" published by CRC Press. (Co)author of more than 200 scientific articles, Dey is an IEEE and ACM Fellow.  He has also been inducted as a Fellow by Solid Modeling Association. He led the Jyamiti research group at OSU and headed the NSF sponsored TRIPODS Phase I Institute at OSU.