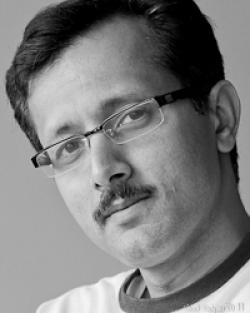 Title: Learning and Sampling of Atomic Interventions from Observations

We investigate "efficient identifiability"; the question of efficiently estimating the effect of an intervention using bounded number of samples from the observational distribution. We present a quantitative version of the result of Tian and Pearl (AAAI ‘02), the work which characterized the class of causal graphs for which causal
effects of atomic interventions (intervention on single variable) can be identified from observational data. In particular, we present algorithms with provable sample and time complexity bounds to evaluate and sample the interventional distribution that meet Tian and Pearl's identifiability criteria.

In this talk, we first present the basics of causal inference model and then present our results. If time permits, we will outline the proofs. This is a joint work with Arnab Bhattacharyya, Sutanu Gayen, Saravanan Kandasamy, and Ashwin Maran.

Bio: Vinodchandran Variyam is a Professor in the Department of Computer Science and Engineering, University of Nebraska-Lincoln (with a Courtesy appointment with Department of Mathematics-UNL). Before joining UNL in 2001, he served as a Research Assistant Professor at the University of Aarhus, Denmark, and as a postdoctoral fellow at NEC research Institute, Princeton. He received his PhD from the Institute of Mathematical Sciences, Chennai, India.  Prof. Variyam's research
interest is in foundational computer science.  He has made significant contributions in several foundational computer science topics including derandomization, circuit complexity, space-limited computation, and Kolmogorov complexity. Very recently his interest has been on algorithmic and complexity issues related to data analysis including machine learning and computations over large data sets.